Sadly some bridges suffer from vandalism. It is not as common as people believe. It takes many forms. Graffiti is the most common. There are paints from which graffiti can be wiped off.   Fire can be a local problem and once it starts it is hard to prevent repetition. We recommend the prevention of a build up of debris under the bridge. Not all fires are deliberate. Attempts to remove parts or even dismantle sections have been known but the use of anti-vandal fixings on sites with a known problem can manage this. We also combat this by recessing fixings in the deck and parapet whenever possible. We have to be careful that our efforts to make bridges vandal resistant don’t prevent inspection and maintenance. some bridges appear to be more vulnerable. Softwood obviously burns more easily. Suspension bridges can be wrecked if the cables are compromised. It is not always the “roughest” sites which suffer most. A couple of years a...

Historically when breaking waves deposited water on the promenade at Trearddur Bay in Anglesey the water ran down the road and flooded the town centre   Working the Atkins we developed a solution. By providing an exceptionally large road hump with a huge Kinghurst Bypass Kern along its edge. We tamed the beast. The water runs down the road and is stopped by the road hump. The camber guides the flood water to the Kinghurst. The Kinghurst collects it and channels it past the hump and sends it back onto the beach. The above image shows the unit performing perfectly in the recent Storm Denis

Why use Cambered Bridges?

Cambering bridges improves their appearance. By being less straight they fit better into rural environments where there are very few straight lines. The particularly attractive bridge above in Orston was supplied to a Local Community Group. They raised funds by selling a parapet spindle to each villager which had their names burned into them. The timber was Oak. Many Clients like the “feel” of oak. Designers love cambering bridges. It has no impact on the installation   Cambering bridges also makes them marginally stiffer. This is partly by stressing the steel and partly due to the virtual increase in the effective depth of the beams It can disguise differences in levels between banks. A lot of people find them more attractive The beams are rolled under immense pressure by specialists.  Sadly, the cost of transport and the rolling costs, when cambering bridges add a significant sum to the project cost. Beams can be formed f...

Why is the incidence of injuries to cyclists on cattle grids increasing? It is difficult to strip out the number of cyclists injured on Cattle Grids from the general accident statistics. This is a matter which should be addressed to inform Public Policy. The absence of this important data means there is no evidence base to determine if these is a problem. However there are so many more reports in the Press and as Highways Engineers we are seeing more example of it in our daily activities. There is a growing swell of complaint arising from the Cycling Community and it would appear that something is happening. So why is this happening? The initial reaction is “More cyclists mean more incidents”. Although this is statistically probable there are many other potential factors. These can be divided into 2 groups of potential contributors. Changes to users Grid Related issues The first group is beyond the scope of this article. We will focus on the Gri... 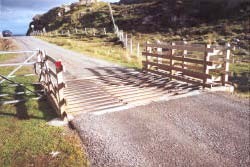 At Blackburn and Roberts we listen to our Clients .Decades ago we attended the first HAUK Conference and Exhibition. A banner on our stand read  If you can draw it we can make it." and an Engineer from Solihull Council took us at our word. We made the first bypass kerb units for them and they became an industry standard for almost 20 years. In some locations we now offer an anti slip surface as an option. There are fewer Kerb to Kerb Humps these days but the product still remains a popular and economic solution.

To the lovely Ayrshire Coast to carry out a Feasibility Study for a private client.Could not miss the opportunity to view an old site - Stevenson Beach. We built this almost 30 years ago. Fighting winter gales and carrying decks 3 miles along beach with large tracked excavator. Good to see it still undamaged by storms and large waves and with anti slip decking still intact Walker enjoying viewing platform and wonderful summer weather. Galvanising and foundation still in excellent condition after decades of exposure to weather and daily sand blast

What is the best kind of bridge for my needs?

In order to make a choice we need to make some assumptions and if these assumptions prove wrong we will make a bad decision. For example if we assume access to the site is simple and it is accessible to large vehicles is practical we may decide to lift ina bridge complete.If it turns out that we were wrong a self assembly kit bridge to be assembled in-situ would have been the correct choice. This is only one of a huge number of issues which need to be balanced when reaching a decision. This is the reason we advocate Feasibilitiy Studies. A visit by an Engineer with the relevant experience and a brief report will cost a few hundreds of pounds. This would then allow any competent manager to move the job forward with confidence able to make informed decisions.     A wooden bridge will almost certainly be the most economic solution to small pedestrian and cycleway bridges.         These are available in tropical hardwood...